I met Kate at a LERA meeting (That’s Land of Enchantment Romance Authors—a great group) She’s one of our ‘longish distance’ members, living four hours away or more. One of the wonderful things about LERA is sharing our successes at every meeting. Each  member introduces themselves and shares what they’ve been doing that month. A few months back, Kate holds up a book and quietly says: “My first book is published.” Insanity ensued, the room erupting in cheers (we’re a vocal group!) and she passed the book around. ‘Hmmm,’ I thought. ‘Nice cover. What’s the back blurb say? HMMMM INTERESTING.’

I loaded it on my Kindle. I read it. And I knew I had to let as many people as possible know about Kate, and Spark Rising!

The first full-length novel in an exciting new Futuristic Fantasy series that melds the best of Science Fiction Romance and Urban Fantasy, and the winner of a SFR Galaxy Award!
SPARK RISING
Book One of The Progenitor Saga
Available Now! 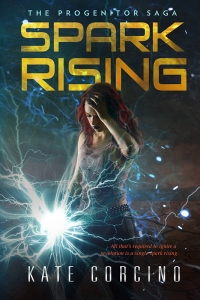 SPARK RISING is sale-priced at .99 cents for a very limited time at AMAZON

Agent Alex Reyes has been searching for the perfect weapon in his war against the men and women who use his kind to fuel their re-civilization. And now that he’s found her, he realizes she’s so much more than he dared to dream…
Two hundred years after the cataclysm that annihilated fossil fuels, Sparks keep electricity flowing through their control of energy-giving Dust. The Council of Nine rebuilt civilization on the backs of Sparks, offering citizens a comfortable life in a relo-city in exchange for power, particularly over the children able to fuel the future. The strongest of the boys are taken as Wards and raised to become elite agents, the Council’s enforcers and spies. Strong girls—those who could advance the rapidly-evolving matrilineal power—don’t exist. Not according to the Council.

Lena Gracey died as a child, mourned publicly by parents desperate to keep her from the Council. She was raised in hiding until she fled the relo-city for solitary freedom in the desert. Lena lives off the grid, selling her power on the black market.

Agent Alex Reyes was honed into a calculating weapon at the Ward School to do the Council’s dirty work. But Alex lives a double life. He’s leading the next generation of agents in a secret revolution to destroy those in power from within.

The life Lena built to escape her past ends the day Alex arrives looking for a renegade Spark.

Hello, all!
I am so thrilled to be here to share a taste of SPARK RISING. This novel came to me in a series of glimpses–daydreams of a young woman, living apart for the safety of those she loves, filled with loneliness and pain. And power.
That power took the form of the ability to manipulate energy in all its forms. I first pictured her atop the ruins of a building, attempting to weld electrical components back together so she could power a water heater she’d rebuilt. Two things caught at my awareness. She was in my favorite Southwestern desert, sweaty, dirty, and desperate…a post-apocalyptic vibe. And she was welding together those metal components using her mind. I had one line, captured from her thoughts, that echoed with frustration and amusement with the force that gave her power…The Dust wanted to help…
My second glimpse was of the same young woman in the desert, preparing herself to discharge energy that had accumulated inside of her–the by-product of her work, and the signature of the Dust. She slowly undressed and piled her clothes a distance away, then paced in dread. She finally set herself, threw back her head in anticipation of agony not even the Dust could fully insulate her against, and released the energy to the earth and the sky. That lightning bolt flashing up and away, the after-image of her falling senseless to the glassed sand, and the knowledge that she’d wake in pain to collect herself and go about her life for another week or so until she had to go through it again seared themselves onto my brain and my heart.
I had to know more. Who was this girl? What was her story?
Her name is Magdalena.
And as for her story… She’s still sharing her story with me every day, and I’m scrambling to write it all down to share it with you.
If you’d like a taste, read on for an excerpt of Chapter One…SPARK RISING
***
“Nothing says ‘Home, Sweet Home’ like an abandoned gas station.”
The words came with a muffled snort from one of the two men following Lena. He probably hadn’t meant for her to hear them—probably—but the rich, husky tone of his voice carried them to her.
Lena rolled her eyes, her back still to the client and his assistant. “Does my home offend you, Mr. Reyes?” She kept her tone even and pleasant. It took effort. A lot of effort.
“No, no,” he answered from behind her. “I’m just trying to understand what would make someone see this place and say, ‘Now this…this is the place I want to call home.’” He paused. “Miss Gracey,” he added, mimicking her formality.
She could hear his amusement. It was nothing she hadn’t heard from other clients before. As far as she was concerned, he could keep trying. She highly doubted he’d get it.
When she’d arrived at the ancient gas station nine years before, she’d been fifteen and full of rage, fear, and pride over making her escape from a life of hiding in the city. The empty building still stood firm against the onslaught of the world. Buckled, collapsed pavement at the far end of the lot showed where the tanks below ground had ignited during the cataclysm two centuries before. The void was filled with sand pushed by the wind—a shifting, fatal trap for the unwary. A tumbleweed bounced across the rubble of the road, smashing against teetering pump fourteen, shedding thorns and seeds as it rolled off again.
The desolation was a reflection of Lena’s grief. She’d staked her claim on the station and carved her home out of drifted sand and weeds. She didn’t expect those who lived in the comfort of a relo-city—surrounded by people and walls to keep the world at bay—to understand why it mattered to claim a corner of the wild as hers alone. The cities that had grown out of the post-disaster relocation centers were the last hope of those clinging to the old ways. They were willing to give up a lot to live in safety. She knew safety was relative.
Now her client, and the assistant who’d powered the electric vehicle to get him out here, sized her home up as they followed her inside. The visual examination of the home she’d built for herself, the life alone, was typical of every client, every time.
This time the examination, and the judgment it implied, rankled. She spun around, mouth opened to snap at them.
She stopped. Alejandro Reyes had removed his antique sunglasses, and his dark eyes were focused on her. She tried to escape the intensity of them by looking down, but that was a mistake. Instead of a heated gaze, she caught his wide-chested, lean-hipped body as he slid closer to her like one of the big cats of the desert, stalking prey.
He’s not a hunter, Lena. Just another indolent client looking for a black market charge to make his easy life easier.

Still with me? *grin*
I hope you enjoyed this taste of the novel. I love to hear from readers (and potential readers). Feel free to visit me at http://www.katecorcino.com or drop me a line at katiecorcino[at]gmail.com
If you’d like to keep reading, Spark Rising is available in paperback form through both Amazon and Barnes&Noble online.
It is available in a variety of e-formats at these retailers:
Nook: http://bit.ly/1ITscuU
iBooks: http://bit.ly/1wZbkzG
Kobo: http://bit.ly/1vZh8Cd
And it is on sale at Amazon for .99 cents for a very limited time:

Author Bio:
Kate Corcino is a reformed shy girl who found her voice (and uses it…a lot). She believes in magic, coffee, Starburst candies, genre fiction, descriptive profanity, and cackling over wine with good friends. She also believes in the transformative power of screwing up and second chances. Cheers to works-in-progress of the literary and lifelong variety!

She is currently working on the continuation of the Progenitor Saga, a genre-bending near future dystopian adventure series with romance, science, magic, and plenty of action.
Kate lives in her beloved Southwestern U.S. desert with her husband, several children, three dogs, and two cats.