How I Made 10,000 Steps…the First Time #AmWriting #MFRWAuthor

Yes, Fire Dragon, this story is about you

Yes, I have this Fitbit. When I first heard about step trackers I was not truly impressed. Yeah, yeah, my friends walked all these steps, but they walked a lot anyway. But…the more I heard, the more I thought about competing. Not against anyone else since I’ve learned that’s a waste of my energy…but against myself.

The first tracker lasted maybe a month? It had been a cheap knockoff and I gave up trying to figure out the problem. In that brief period of time I realized my normal day’s walking was about 3,000 steps but I could bump that to 5,000 if I just parked further out from the stores. After a few more false starts I picked up that small Fitbit I talked about yesterday.

Normal days now end up around 5,000 steps. Add in dog classes, whether Agility or Conformation, and it can bump close to 8,000 steps. Without any real effort. Nice, but the initial 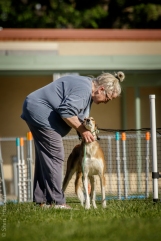 Getting ready to have FUN

I started wearing that little tracker all the time. Last Saturday Fire Dragon and I attended an Agility trial. This particular organization emphasizes safety and FUN. Our kind of place.

Not only did I run with him in the class I also walked courses, went back and forth from set up (where my dog was cool and comfy) to the work area. Many times. In long sleeves which it turned out was NOT a good idea. I tend not to notice things like this while I’m with my dog, but later, oh myyyy…. And I still had to move crate and blankets and water back to the truck. In the meantime, Fire Dragon was already safe in the truck crate. 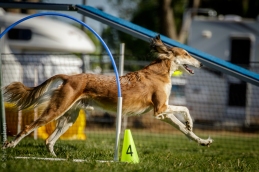 The judge was delightful and so patient. Although at one point 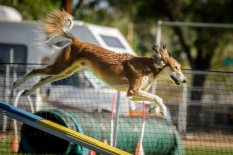 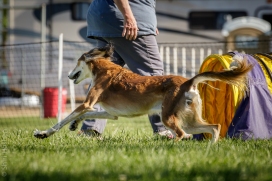 Next time, let’s try to both be going in the same direction, okay?

much fun.” And this was before he saw my red boy.

Isn’t it fun to make an impression! 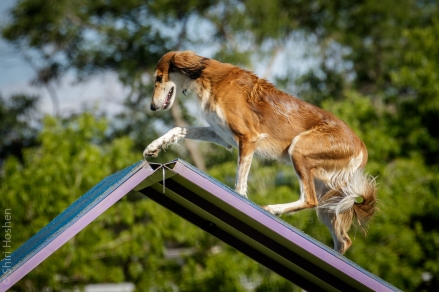 LOOK AT ME, I AM THE FIRE DRAGON 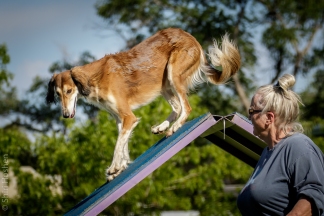 Ummm, Mom, you still there?

At the end of the day, that Fitbit was pushing 11,000. Without (much) effort on my part. Thanks to the talented photography of  SHIRI HOSHEN, we have a record of this day to share with you. Now to keep that level of activity up every day.

5 responses to “How I Made 10,000 Steps…the First Time #AmWriting #MFRWAuthor”