Right off the top. I read it, voraciously. And I revel in every new author I meet who writes it. For writing, I do better at paranormal and fantasy. All that science is just…not my strength. Although no less a writer than Arthur C Clarke said

‘Magic‘s just science that we don’t understand yet

With which I absolutely do agree, though to some of us science is still more magic than reality. I can not create the science to propel my rocket ships. Andre Norton, my childhood writer crush, simply sent people from here to there in ships that could do that sort of thing. It worked for her, but now readers are asking for more science, however magic it might seem. We are, after all, a part of the Star Trek generation.

Except, no matter what readers might want, some editors seem to think that pesky science is going to get in the way of the romance, and readers won’t like that. Really? Readers who search shelves literal and virtual for SCIENCE Fiction ROMANCE aren’t going to want much science in their books?

If these editors would take a moment to apply LOGIC to their decisions, they might wonder how many people would look for Paranormal Romance without vampires or shifters or immortals? Would that reader be coming back to that publisher’s books any time soon?

I’d been thinking in terms of talking about Science Fiction Romance soon, but was prompted by a rash of blogs discussing this very subject to do it now. Such as Heather Massey’s It’s 2015 and One Publisher is Still Trying… Referred to by Greta van der Rol in You Can’t Have Science Fiction Romance Without the Science Greta should know, she writes rollicking good Space Opera. Towards the end of her blog, Greta references two more articles. The second one has to do with female superheroes.

In the meantime, I’ve been trying to find a place to tell you about the SFR authors I’ve discovered lately. Writers who have stimulated my imagination and stolen my sleep. So I’ll just mention some of them here.

Greta van der Rol, yup. Her MORGAN SELWOOD perfected an engine that danced within itself and…well the science is beyond me, it’s better to read it, and get Greta’s take on where we as a species are going.

Kate Corcino came up with another possible future, where electricity becomes…something else SPARK RISING I suggest you read IGNITION POINT first. You’ll understand why.

And so many more, like ST MARY’S CHRONICLES, mixing science with history, insanity, and a cup of tea.

All of these, by the way, written by women, for anyone who wants a good read. Too bad some publishers are still not getting the message. Most of us really don’t care about the chromosomes of the writer, only about the book.

Do I have pictures for this blog? Hmmm. Here’s a lone pilot, searching for truth in the publishing world. 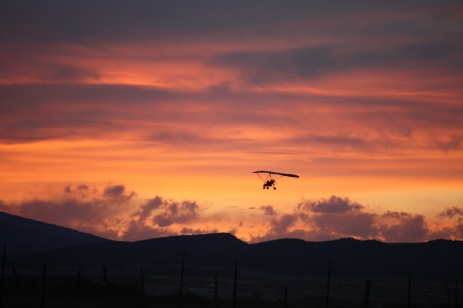 Airs Above the Ground?