I love sharing authors with people who might not know them. Makes me feel good and

helps all of us. Alice and I go way, way back. Before either of us was published (she long before I did) we would meet at Bearly Used Books as critique partners. I’d have a chapter to share, she’d have most of a book. One of those books became a Golden Heart finalist, and was her first book published, One Bright Morning

Over achiever much? You betcha. She admitted she was driven to become published. Even more than that, these were GOOD books. Mostly historical, well researched, elegantly written, often described as ‘literary’… she prefers a comparison to writers such as Bret Harte. Either would of course cause a problem in a world of more modern writing. After a stint of writing historical romances she turned to more mysteries. Historical of course. In particular Pasadena in the early 20th century. Did you know Pasadena was the place to be if you were in the film industry? Yup. Alice wrote about that in Cowboy for Hire 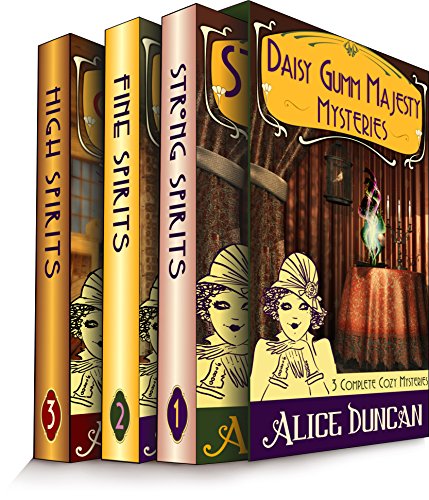 Alice has written so many excellent books you can easily depend on her for many days of snuggling up with a cup of tea and a story on a winter’s day. Heck, you could spend a month enjoying the intrepid fake medium Daisy Gumm Majesty. You heard me right, a fake medium, who gets herself involved in the real problems of her clients. Add in a family that would drive any sane person around the bend, with a bit of pathos for her young husband, injured in The Great War, and you have a series of never ending enjoyment.

Even better, you can get your start with A set of the first three for only .99!

When not writing, or tending her roses, Alice is involved in her true love, Dachshunds.

For years she has opened her home and heart to these fiercely loyal but frankly kinda silly- looking dogs. Yes, that’s her reading the Sunday comics to the pack. Most if not all of her wiener dogs through the years have been rescues. So glad for them there are people like Alice

If you want to see what she looks like without the newspaper shield, check out her very clever website Alice Duncan’s website Here you’ll also find ALL her books under ALL her names.