I figure if I promise yummy food I can bribe you into reading a bit.

When I first started writing I had to ‘write my way’ into a story. In fact my very first story I dropped SIXTY pages to get to the beginning. And now I’ll drop most of that book except for a few names and basic premise. And the location of course since it’s in the same area as A Question of Honor…it’s Kyle’s story. I’ve added pictures of what you’ll see when you come visit New Mexico. 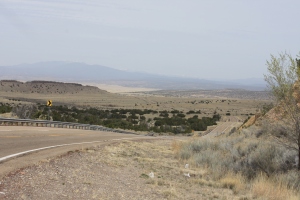 With Honor, I started in the right place but had to delete massive amounts between then and them arriving at Stormhaven. Most I gleefully removed but a few I really cherished. I really tried to keep them, maybe move them somewhere else. Like this scene.

Set Up: Sydney has been sleeping on the couch, Devin on the bed. He finally convinces her to share the bed, for sleep only. They’re in a rough part of Los Angeles county where gunfire isn’t unknown. Both of them have been under fire in the past, and their memories sometimes intrude on the present:

Gunfire punctuated the restless night, five or six shots to the east. Sydney tensed, her eyes wedging open as she drifted in the half waking/half sleeping state she had occupied since lying down. Since her neighbor’s son had been arrested, the last few weeks had been peaceful, and she’d been able to rest undisturbed. Now, she automatically began to identify the weapons used as she registered the warmth of another body in the bed with her.
Devin hadn’t joined her immediately and she feigned sleep when he eased down, still wearing his jeans, on top of the covers on the other side of the bed, and pulled a quilt over himself. His remarkably soothing presence in the dark eased her tension just by being there. With this man she felt no threat, no undercurrent of dominance. Suddenly all the years of loneliness began to be to much for her. Of all people, Devin, with the past she knew he had to have, could understand.
She pried her eyes open a trifle more, sensing his wakefulness. “Devin?” She sounded husky, harsh.
“Yo.”
“I’m not coming onto you but,” she hesitated, then finished in a rush, before she lost her nerve. “Can I touch you? Please?”
Devin turned his head more fully on the pillow. Dozing next to Sydney was a delightful form of torture. He knew she had not been fully asleep herself, but she seemed to be resting until the distant gunfire. In the intimate honesty of the night, her voice sounded shaky, her slender body tense under the blankets. “Sure.” He braced himself for anything.
It was a gossamer touch, fingertips just grazing his arm until her hand spread and her palm cupped the bare skin of his shoulder. Warmth radiated from the shy contact, racing along every nerve ending in his body, collecting in his masculine center.
“Thanks. Sounds like late night target practice. Sorry to wake you.”
“It’s perfectly all right to be afraid of gunfire.”
The reassuring voice grated on her nerves, but Sydney didn’t think it would be a good idea to explain it was memories, not fears, that kept her tense. The irritation helped block the strange tingling sensation originating where their bare skin touched. She had never been able to relax with a man in her bed, but this was a new sort of tension.
“I’m used to apartments, where I could just lock the doors and leave the stereo on all night. Now, I have to be able to hear if anything happens to Mosby.”
“Have you always lived in apartments?” The conversation was startlingly personal, with their heads on adjoining pillows. He could feel the brush of her breath against his chest.
“No.” Her voice softened as memories took over. “I lived in a house once, with flower beds and a porch with a swing.”
Devin watched the moonlit silver of her eyes as she wandered through memories both happy and sad. “Was that when you were married?”
“No, this was much later, after Dad retired.”
“What happened, Sydney?” He responded to the pain he could feel radiating from her body, the tension in small fingers that were beginning to dig into his shoulder.
“It’s gone, now. There was an explosion. They said it was a bad gas line.” She swallowed, and took a deep breath. “Sometimes, when things wake me up, I remember.”
“Sometimes,” he admitted, wanting to take over her memories, ease her pain, “I have trouble sleeping, myself.”
Finally, she focused on him, her eyes softening, going hazy with approaching sleep. “I know,” she whispered, before her eyes closed again, and she was asleep.

I tended to write late at night back then so a lot of scenes ended with going to sleep…back then sleep was my idea of luxury!

Here’s the link, which will lead you to one of my favorite low carb sites, and MUCH better pictures than I could ever take  ALL DAY I DREAM ABOUT FOOD

The ingredients, so you can check to be sure you have them all:

Mix together, drop on a tray lined with parchment paper (do NOT forget that paper) bake at 350F. Details on that page