Day 6: Tell us about a time when you surprised yourself.

This is going to be a rough one.
Throughout the years I have learned I’m a selfish person, and prefer to walk away from stress. I’m also far more lazy than I’d like to 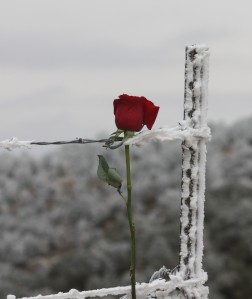 admit. This in addition to the usual detritus of growing up kept me from wanting to marry until I was pretty much past the age when my mother stopped nagging me about marriage. Well, and also I hadn’t found anyone I’d really want to spend the rest of my life with.
Until that life changing day I met a sweet guy at a dog show. It took a few years before we both managed to be in the right place at the right time, and we took those for better or worse vows.
So.
Forward more than twenty years, in 2011, he looked yellow to my eye and I bullied him into going to the doctor immediately. In those bright doctor office lights he could have rivaled the Simpsons. Off to the hospital, and the specialists.  A tumor was blocking his bile duct.
Surgery, five months in the hospital and acute care center until they ‘could do nothing more for him.’ Which is hospital speak for ‘the insurance won’t pay if he doesn’t show progress.’ They said he had to go to the hospice floor of the hospital since he wasn’t going to get better and: “Your wife can’t take care of you.”
Wait a minute.
Who said I couldn’t take care of him? Yeah, okay, selfish, lazy, avoiding stress. But this was different. This mattered. Even if he only lived the week longer the doctor predicted, he deserved to have that week at home, surrounded by the dogs and the property he loved.
We got three months, and I learned more about patient care than I thought I wanted to know. I also learned how to heal deep seated infections the hospital couldn’t clear up, and how to bully, prod, tease him into working harder than he ever wanted. In the end it wasn’t enough but we were able to share a few months. When he finally slipped away I could believe I’d done the best I could.
Was it a win? Well at least it was a short term success. Would I have changed anything? Of course I’d rather have him here fussing about his lawn tractor than have him in a container in the closet. Could I have done more? I have no idea. I just know I did the best I could at that time. And that’s all any of us can do.

photo credit Monica Stoner…that’s me when I’m not writing!