Peeking in on A Question of Honor #SPeekSunday #MFRWAuthor 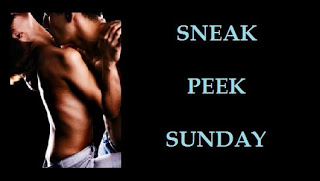 Here’s a peek at the beginning of A Question of Honor, which is with Beta readers now, ready to go to Black Opal Books very soon. A Question of Honor is the first story of Stormhaven, a ranch in northern New Mexico which offers sanctuary to those wounded in spirit by their defense of country.

She knew that walk. With a slight hesitation in one leg he prowled like a wounded predator, conditioned to succeed against the most dangerous game of all. Even limping, his reactions would be instantaneous, his balance superior. By itself, his body would be a weapon. He’d be the best man to have on your side in a battle. After the battle, he’d unwind with a drink and a woman. The drink would be strong and straight. The woman would be bosomy and not too bright. He’d very likely spend more time with the drink than the woman.
Sydney Castleton let her mind drift through bitter thoughts and buried memories as she waited for the man who proclaimed danger with every step he took toward her. He was no different from the men who’d worked with her father: Soldiers of Fortune, whose luck could run out at any minute.
What trouble had her sister gotten her into this time?
This late at night, the Long Beach airport was far quieter than its Los Angeles counterpart to the north. Weary passengers straggled across the large hallway, looking for friends, for family, for signs guiding them to their luggage and the end of their trip. The surrounding crowd would see only the man’s height, the breadth of his shoulders, perhaps the dark hair under his wide-brimmed hat. His distinctive gliding walk might seem merely athletic, and who else would notice his awareness of everything around him?
Sydney knew these skills demanded a greater price than most would willingly pay. What had his payment been? She shook her head to dispel the thought and quell her imagination. He was just a man, after all, here to help her move a horse. She put aside her memories and stepped forward to greet him.
He didn’t seem to notice her at first, his attention on the rowdy returning youth sports team about to overrun the lobby. With a quick step to the side, he slowed down and put himself behind a young mother pushing a stroller, until the swarm separated around them without incident. Then he looked over to Sydney, and tilted his head, indicating a door leading to the outdoor baggage claim area. 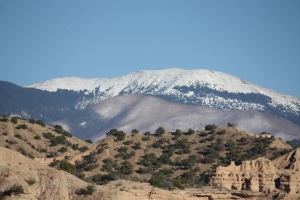 Sydney and Devin will be heading into the mountain area, somewhere in Northern New Mexico…kind of like this picture.