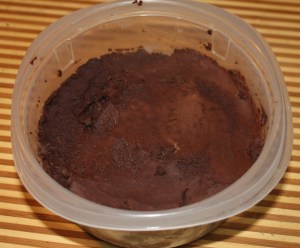 Diet is a four letter word striking fear in the hearts of lovers of all things chocolate.  Sure, there are  chocolate “substitutes” and chocolate flavored drinks or meal bars.  For those who crave chocolate, those are a poo

r substitute, and we often over indulge in a search for that ultimate thrill of chocolate on our taste buds.  When Trader Joe’s came out with their low carb chocolate bars, the flavor thrill was possible though the texture lacked that sheer indulgence of fudge.

I found recipes for low carb fudge made with peanut butter, or almond butter and again, found some taste satisfaction but not exactly what I was looking for.  Then I came across a simple recipe Basic Low Carb Fudge Recipe and found a modicum of bliss.  Unfortunately I don’t keep blocks of baking chocolate around and I wanted fudge NOW.  So I did the substitution of one tablespoon of oil and three tablespoons of cocoa powder, and got a lovely rich fudge.  Not quite chocolate enough but getting there.

Last night I added another more cocoa powder and hit darned close to Nirvana.  Mmmmm rich dark chocolate in a sensuously smooth texture.  Oh, yeah.   The only thing left now is to figure out how much chile powder to add for that special “zing.”

So: The Ingredients.  Anyone who thinks they might be on my Christmas gift list close your eyes for this picture, since I’m making up vanilla extract for Christmas gifting, and that’s homemade vanilla in the antique glass jar..

You might also receive lavender sprays if I can figure out how to dry it effectively.  Hmmm, I’ve had some great chocolate with lavender flowers…

One stick of butter, salted or unsalted (I used unsalted) One 8 ounce cube of softened cream cheese, One teaspoon of vanilla extract, 3/4 cup of cocoa powder (not hot chocolate mix, straight cocoa) I added a bit extra since I really really like dark chocolate. One scant cup of your choice of sweetener. I’ve tried Xylitol, and some of the “baking mix” sweeteners.  So far I’ve preferred Stevia but there are more choices.  I go with less than a cup since most of the sweeteners come up way too sweet for me.

Melt the butter in a sauce pan on low heat, add the cocoa.  I sometimes microwave the cream cheese if it hasn’t set out long enough.  I find sometimes if I set it out it disappears, even from the back of the stove, if Hoda’s in the house.

This is Hoda the counter surfer

Take it off the stove, add the rest of the ingredients.  Beat for a while to mix.  Pour into your container of choice.  Try not to eat it all before it has a chance to set up.  Yep, yummmmmmmmmmmm.