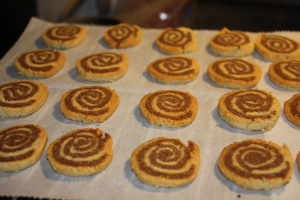 I’ve been eating low carb for nearly three years. Although I don’t have the amazing results some people report, I’ve done well for myself, losing about a quarter of my weight initially and maintaining for a while. At first I missed some of those foods I was sure I could not live without: bread, rice, potatoes…COOKIES.

I just love those bits of crunchy yummies in so many flavors. Obviously, with sugar and flour off the menu I had to improvise. I have managed, with the help of some wonderful websites, such as http://alldayidreamaboutfood.com/, where I found this great recipe to take to a party: Chocolate Pinwheel Cookies. NOTE: I found they tasted even better when I left the roll of cookie dough in the refrigerator a day or two longer.

Not everyone wants to eat low carb, and I really wanted to take something different to a party. Some recipes I’d seen on FaceBook intrigued me, especially one using rolls in a tube. I figured if I didn’t have the raw cookie dough in front of me I’d be okay, right? What a test of my will power. It helped tremendously when fellow LERA authors took the rest home! 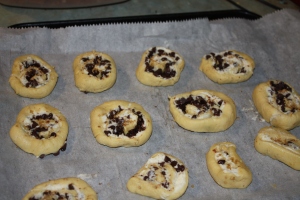 ready to go into the oven

This recipe just looked like so much fun, and dead easy to make, and there were plenty of recipes to choose from. THIS ONE shows every step in pictures, if you want visual aids.  You use Crescent rolls, cream cheese, chocolate chips, and sugar. Sounds simple, and it really is.  I mixed one 8 ounce package of cream cheese with two teaspoons of vanilla extract (homemade!) and 1/4 cup of sugar (I have sugar in the house to feed hummingbirds in the summer) with a hand beater until it was creamy smooth. Then used parchment paper above and below to roll out the dough 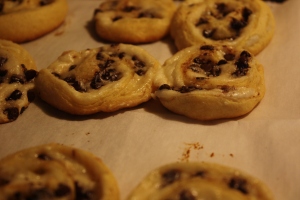 All done! And I didn’t eat one

nice and flat. Spread the cream cheese mix on the flattened dough, sprinkle on chocolate chips. Here I deviated by using a full cup of mini chips.

Roll it all up, wrap in plastic wrap and stick in the refrigerator to set up. I found knives didn’t cut the roll smoothly so I pulled out some string. Much better!

I’ll be sharing more recipes in the new year, and welcome other writers who’d like to talk about their books, their lives, and their favorite foods. 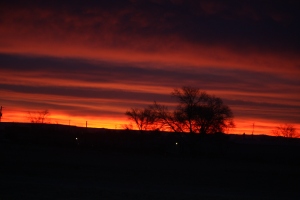 Winter Sunset on the High Plains

Welcome to What Time is it Anyway Season

I have a very dear friend with a killer work schedule who revels in Daylight Savings Time since it means she’ll get to see the sun at least once a day. Since I do love her, when we talk I try to be cheerful about time changes. It’s not as if I’m tied to a clock myself these days.  Getting UP relates to getting the dogs out more than any specific time constraint.  Though I gotta tell you, Salukis are far less likely to listen to excuses! 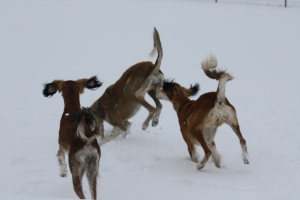 Come PLAY with us…this was in 2010,sadly nowhere near this much snow now

Doesn’t help that the day started out dark and next thing you know these white flakes started to float out of the sky.  Snow’s great if you get enough to help the water table but I’m afraid this is only going to be enough to restrict outside activity and not enough to help out the drought.  Sigh.  But it is pretty and South Mountain looks wonderful with a shawl of snow.

At the LERA (Land of Enchantment Romance Authors) meeting yesterday we got to listen to Clifton Chadwick read excerpts from fabulously written books while Sara Hanberry Baker led us in some introspective and sometimes wild discussion.  I’d love to link to their blogs but neither seems to have one.  However LERA does! If you haven’t checked out our fabulous chapter, take a few seconds when you can.  We have a superior blog (wow, proud much?)

Belonging to LERA is inspiring, especially when Darynda Jones and Robin Perini make it to the meeting.  Name dropping anyone?  We have over 50% published so there’s a lot of names to drop, which I’ll be doing in the next few blogs, especially when these wildly successful ladies share their secrets.  From Darynda we learned about Write or Die, a no nonsense writing prompt that sounds worse than a spouse nagging.  I’ve downloaded, and will let you know what happened.

Since I had such a large group of taste testers I tried out a lwo carb peanut butter pie recipe I’d been playing with. I was told not to change a thing.  Cool!

First the crust, standard Almond Flour. I found quite a few and will probably be trying others, especially the one with cream cheese

Preparation:
Heat oven to 350 F. Melt the butter (if the pie pan is microwave safe, melt the butter in it) and mix the ingredients up in the pan and pat into place with your fingertips.  Bake for about 10 minutes until the crust is beginning to brown. After 8 minutes, check every minute or so, because once it starts to brown it goes quickly.

One 8 oz block of cream cheese; One cup natural peanut butter (that’s just ground peanuts, again from Trader Joe’s);
One cup heavy cream; 1/4 cup sweetener (if sweeteners bother you, then about 1/2 cup sugar, I’d suggest one of the 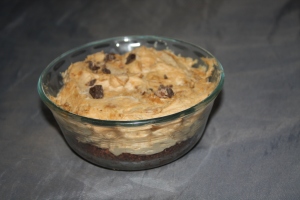 The full sized pie was scarfed up, fortunately I made an extra for a friend.

yummy raw sugars).  This was pulled together from various recipes.  I tossed the cream cheese, PB, and sweetener in one bowl and blended; put the heavy cream in another bowl and whipped it into submission. Then fold them together.  In the future I’ll look at various directions more carefully and add the sweetener to the cream.  It still came out yummy.

Now, I’ve yet to find a sweetener that doesn’t leave a burny after taste in my mouth and I’m thinking for something decadent like this I might use some good raw sugar instead.  Debating, but if I slide from Low Carb to Paleo, which allows a bit more in the vegetable department, artificial ingredients are not on the menu.

I have a line on some local organic vegetables and my mouth is saying “bacon is great but I could really go for some more veggies please!”  I’ll let you know how that works out.

In the meantime, enjoy Daylight Savings Time, hug your loved ones no matter how many legs they have, and keep writing.