I’ve collected so many marvelous recipes this last year, I think I’m going to start collecting them on one page.  Might take a while but I think it will be worth the time.  Right now I’m loving the low carb clam chowder I just made.  Now if I can just figure out how I made it!

1. Chop bacon into small cubes and cook until crisp. I cook it right in the soup pot. Remove the bacon with a slotted spoon, and pour off all but a tablespoon of the rendered fat.

2. Fry the onion and celery until starting to soften. Add the garlic and spices except the thyme. Stir and cook for about a minute. If you have decided to use flour to thicken, add it now, and stir for another 1 to 2 minutes. Count one extra gram of carbohydrate per serving for every tablespoon of flour you use.

3. Add the liquids and stir. Add the low-carb thickener at this point. I like to add it slowly by shaking it through a strainer and whisking it in so it doesn’t clump. Stop a little before it’s the way you like it because it will keep thickening as the mixture continues to heat. Turn the heat off when the mixture begins to simmer.
4. Steam, boil, or microwave the cauliflower just until fork-tender. Drain.
5. Add clams, thyme, cauliflower, bacon, and parsley. Heat again until just at a simmer.
Makes 6 servings.

Great recipe. Except I didn’t have all the ingredients and I’m only cooking for me and my    taste testers and anyway I’m enjoying cheap champagne after a really good day of writing.  So, as best I can remember <g>:

Some bacon grease, in my nifty new heavy pot I bought  myself for Christmas, until soft. Add clam juice, I probably had four ounces in the glass bottle (about half the bottle). Add about 1 tsp Old Bay – I like it spicy 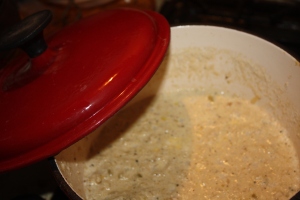 Microwave a bag of frozen cauliflower, about 12 ounces. Pour into the pot, along with the clams (one 6 ounce can)

Use the immersion blender to smoosh up the cauliflower and remind yourself “next time” you’ll blend before you add the clams.

After this has cooked a while, add cracked black pepper (don’t bother with the fancy mixed peppercorns, you want that raw black flavor.

Add cream and half & half.  It’s not rocket science, folks, just pour some in.  Maybe half a cup of each?  Probably a bit more of the heavy cream.  Let simmer for a while.  Enjoy.  Oh, yeah, ENJOY. I’m betting it’s going to taste even better once I remember the parsley and thyme, but even like this it hits the spot on a cold New Mexico evening