Jami Gray started with Black Opal Books shortly after I did. Due to her amazing talent and super work ethic, she now has a series with them, and a series with Muse It Up. Both series feature flawed characters, including strong women who might not NEED a man but they don’t mind having one around. And the MEN…grab your fans and an iced drink!

Huge thank you to Mona for letting me drop in with my latest release, MARKED BY OBSESSION.

So why this book?

Such a simple question with a convoluted answer. As writers, we tend to be drawn to genres for specific personal reasons. I love the unexplained, be it magic or psychic abilities, or whatever unusual ability you can think of, I’m there.  I can trace the roots of the fascination back to my childhood. My biological mom (and we’ll get to the part behind that distinction soon) read me bedtime stories, tales of magic and heroism and fantastical creatures, good and bad, all intertwined as they fought their way through a quest. When I was five, my biological parents got a divorce. It was loud and it was messy and it left a mark. I went from a kid with parents to just my mom and I, who eventually moved in with my now single and separated grandmother. Then I lost my mom when I was six and found myself shipped off to my biological father and his new wife. (Yeah, I know shades of Snow White and all that.)  Then I went from only child to oldest and all of these rather abrupt changes left me floundering so I turned to books to find my footing.  The stories that grounded me the most were the ones of magic and undiscovered planets, journeys where the lead faced each challenge and came out (a bit bruised and sporting alien acid-spit in some cases) triumphant, still in charge of their own destiny.

My real life changes didn’t end there, because when I was twelve I ended up with my soon-to-be adopted family, and become one of many (think horde size). An introvert by nature and bookworm by calling, all that socializing was difficult to process, and I dove deeper into my fictional worlds. So deep, I found myself writing my own worlds, my own heroines, my own quests, and so it began.

As I grew up, so did my stories, and yes, writing is a form of therapy, because as I began to recognize my inability to stomach the “victim” type mentality, not only did I become stronger, so did my characters, until it was obvious there were no such things as princesses in distress, more like Xenas on Harleys ready to take down every freakin’ flying monkey that dared to approach. This seeped drenched my writing and is really obvious in my first Urban Fantasy series, The Kyn Kronicles. The women in those books would make anyone turn tail and run.

But as in everything, time winds on and people change. So do writers. When it came to the PSY-IV Teams (pronounced cipher because secret psychic operatives=cool ass spies) my leads were no less strong, but instead of being so hard-assed nothing could penetrate their emotional body armor, there were spaces where softer, but just as life-altering, emotions could exist. Things like bravery in the face of fear, faith illuminating the darkness, and compassion being stronger than any weapon. Emotionally, my characters matured into the multi-dimensional people they were always meant to be. Don’t get me wrong, they can kick ass with the best of them without flinching, but now they’ll also go hang with you at a bar, crack a joke, or if you’re lucky, sweep you off your feet.

I’ve always been fascinated by the arena of psychic abilities, plus I may have a teeny-tiny bit of a conspiracy theorist residing in a small dark corner. I read a great deal outside of fiction, and one particular book, THE SEARCH FOR THE MANCHURIAN CANDIDATE by John D. Marks, which follows the history of behavioral science and the CIA, helped sparked the idea. After finishing that book, I moved on to THE PSYCHOPATH NEXT DOOR and a few others (which now that I’m reading this I’ll refrain from listing since…um, yeah, my research library of non-fiction titles would be scary to an outsider). Since I found I couldn’t give up my “magical” aspects on writing, I decided to combine my love of the unusual with my second love, Romantic Suspense. Voilà! PSY-IV Teams was born.

I’m a character driven writer, so my characters tend to mold the plot, and when I sat down to begin MARKED BY OBSESSION, I gave myself two challenges: an everyday heroine with 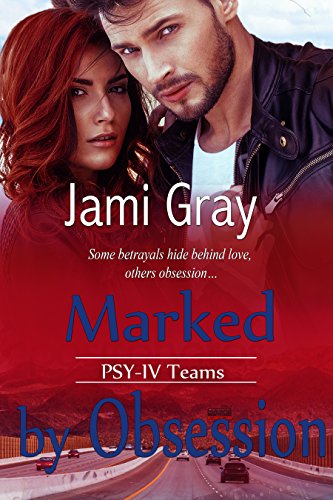 no psychic abilities who could be strong without being a warrior, and she couldn’t cuss. Want to know which one was harder to channel? Coming up with curses that aren’t cuss words is much more difficult than you think.

Wolf is my hardened solider, solid and sure of himself and his place, and just happens to be a telepath. He deserved someone who could keep him grounded, someone who couldn’t be manipulated. Enter Meli, who is quite happy curling up with a book and avoiding arguments, or anything she doesn’t want to deal with. Wolf fascinates her, but she’s lost her only family, her brother, and his death leaves her floundering while her normally staid world tilts on it axis. It also means she’s hesitant to reach out for the one man who tempts her dream big. It doesn’t help that she’s managed to become the focus of deranged stalker, who wants not just Meli, but revenge, and is willing to go through Wolf to get it.

Want to find out what happens? *nudge, nudge* Go ahead and pick it up, I promise you won’t be disappointed.

and of course JAMI GRAY