Reaching Out to my Inner Brat..NOT for the Squeamish #MFRWAuthor

I haven’t decorated in…forever. Didn’t seem much point, no one comes this far off the main road and not many people come to visit. Plus the creative side of me that was all about making it different seemed to be asleep. Then I got to thinking about SPIDERS. I don’t mind spiders as long as they don’t bite me, but I know many people have serious issues with arachnids. And I thought about the impact of LARGE spiders crawling around on my fences.

Unfortunately none of the stores in Edgewood carried large spiders to put outdoors in potential high winds. Amazon to the rescue, and this showed up at my gate:

Which unwound into these: 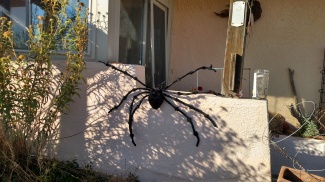 Those came out okay, don’t you think? I did warn some of my more sensitive friends not to drop by for a while! And I thought, enough for goofing off this year.

Then I found a treat for the ‘lukis, who’ve been eating raw food forever. Chicken feet. Which are full of all sorts of good things nutritionally but they do look a bit, well, handish, don’t you think? Especially against a sort of earthy looking background. Like this: 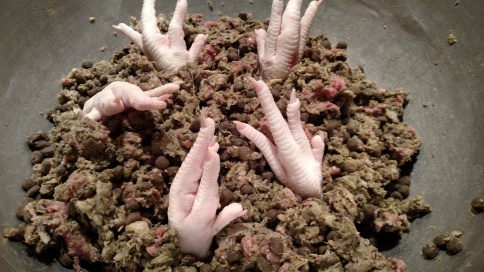 They told me to stop playing with their food…silly beasties.

Let’s end up with something prettier.

The veil is thin tonight…enjoy your Hallowe’en.

I haven’t been involved with much promotional work lately (I know, shame on me!) but when the delightful Nicole Morgan offered an opportunity to be part of what she was organizing, well, of course I had to give it a try. Sooo:

Welcome to the Romance Your Autumn Nights

Yeah, a little late here so we’ll need to rush a bit and catch up. There will be a Facebook party October 27…this coming Thursday. I’ll be grabbing a time slot and getting to know you even better.

This party can only be so spectacular because of the other wonderful writers participating. Such as: Staci Troilo, Andrew Jericho, Kathryn Lively, Stacy Juba, Sheri Fredricks

I’ll share as more writers become available…this will be so much fun! There will also be a RAFFLECOPTER to help choose our WINNERS! Just click on that word and you are there! 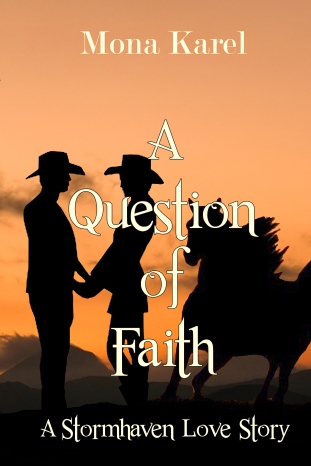 Find us on Amazon

I looked out this morning on dry ground and bright sunshine, then looked at the calendar.

Five years ago, the acute care facility said they could do no more for my husband, and prepared to send him to a hospice center. Since, they told me, I could not take care of him myself. Obviously I took this as a challenge and the next day he was delivered to the front room, to stay on a hospital bed for the next three months.  Looking out at the land he loved. I’m not saying this to ask for pity or praise, merely dredging up memories, and wondering if it’s time to put them away. To move on.

Is it ever time? How long do we wallow in memory before we move on? Wow that was kind of severe. Have I been wallowing? Might be. Just might be that I’ve been holding myself back from whatever it is I need to accomplish. Maybe the slow but steady progress in the garden, with writing, with the dogs, shows me I’m ready to move on?

Or maybe I don’t need to specifically move on, but I do need to make room for the present and the future. That sounds good. I’ve managed to finish and publish books since then. Managed to make it to meetings, judge dog shows. Write more books. I think he would have liked that…he enjoyed telling people about his wife the writer, the judge, the delegate.

For once I’m not going to dredge up an old song. If I did it would be memories, from CATS. He really liked that song, and the show. But, 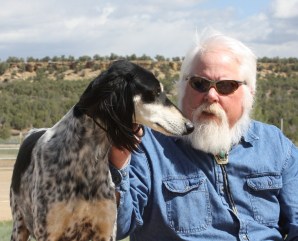 yeah, I’ll share some pictures. How can one live in a place like this, with dogs like these, and NOT share pictures? So, yeah, here’s one of him and one of the dogs. Enjoy. And if you have someone of your own, give them a hug for me. Thanks.

About Those Flowers #MFRWAuthor

So you have a relationship in trouble, and the two people involved are throwing accusations around. You don’t bring me flowers. You don’t sing me love songs. You don’t talk to me. You just roll over and turn out the light.

Doesn’t it all sound so familiar? Dissolving years of attraction, of trust, over what? Without ever getting down to the real issues, whatever those might be?
Doesn’t it also sound like the plot of so very many romance books? You have the ‘big misunderstanding’ separating the two for months or years or longer? Isn’t this all too often the impetus behind wanting to just toss that book against the wall? Or maybe writing your own?

If They Would Just TALK to Each Other.

Yeah, that. And don’t most of us try very hard NOT to put our people in those situations because, well…it’s too much like the blonde in the filmy white nightgown going down the steps because she heard a noise in the basement.

As far as these fictional people singing to each other…buy your own flowers, try singing love songs to her and for heaven’s sake TALK to each other. Yeah, that.

Because life and love are too precious to throw away.

Don’t forget A Question of Faith is now ready for you to read about Ty and Roz learning to trust each other. I just love those first days of a romance, don’t you?

Simon and Garfunkel’s Sounds of Silence was first heard in 1964, but did not gain great attention until 1966. I remember wondering about the disparity between the lyrical music and the confusing, disturbing lyrics. Speaking of disturbing, a new version came onto the scene in 2015, from a heavy metal band, Disturbed. Some people have expressed outrage at this version.

Well, it does project a different air entirely but what should we expect? It’s a different time. From 1964 to 1966 we saw bombings in other countries, an attempt to control who could vote through testing, attempts to legalize marijuana, civil unrest from integration, attempts at immigration reform, really bad television programming, and…and…hmmm maybe not so very different after all. See for yourself: Timeline 1964-1966

The Disturbed version of Sounds of Silence is, in my opinion, more blatantly powerful. There’s an excellent music video but I think the live performance of the singer and the music is even more intense:

The more things changes, yep, the more they are the same.

On the writing front, I’m done with the first messy draft of A Question of Trust. Phew! Now I need to pick a book to launch with NaNo. Any suggestions?

For some serenity, I’ll share this evening’s sky. Peace out.

When They Tell You to Take it Easy #MFRWAuthor

I had this “thing” with my feet. Actually I’ve had this foot thing for a while now. I can remember looking for somewhere to prop my left foot…for just a few minutes…to make it feel better. It’s grown into something serious enough for me to trip from time to time, stumbling when I need to power forward.

And I decided it was past time to do something about this foot thing. Especially since I discovered we have a Foot and Ankle Clinic right here in Edgewood. So I don’t have to drive to Albuquerque to be told I have flat feet (DUH) with no advice on how to avoid that stumbling. I decided to try out this closer doctor, who told me a simple in house surgery could alleviate some of the problem.

Mind you simple and surgery don’t compute in my mind but the chance to reduce the pain and swelling was too good to pass up. I’d thought to take pictures during the actual procedure but I didn’t think they would be acceptable to many readers. Blood and bones, you know. Not pretty.

I did get a boot to wear, and I wore it religiously. Including crawling into bed with 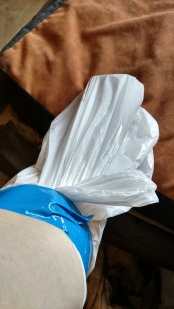 the darned thing on my foot. Showers were a particular form of fun. And I had to take it easy while the toe healed.

When the garden fence

needed reinforcing and the gate had to be replaced and I really wanted to try to set up a bird feeding station. Still, it was just for ten days, two weeks, tops.I could entertain myself with New Mexico Autumn Skies.

Then today, I saw my toe again. And it was good. At least it will be. 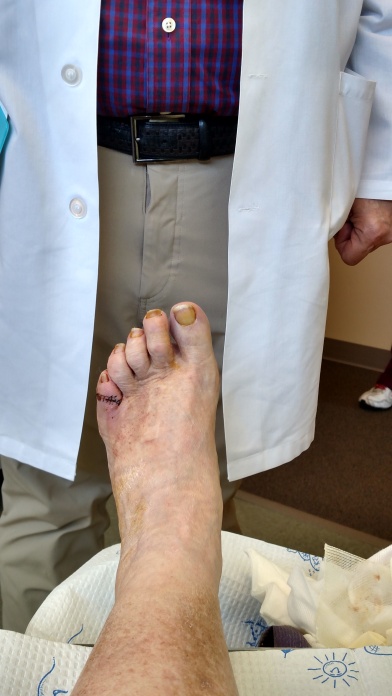 Unfortunately I can’t say the same for A Question of Faith. Amazon has hiccuped, and it’s not yet available in e-book. I’ll let you know as soon as it is.

We all have those special people we feel have influenced our lives in some way. Maybe a 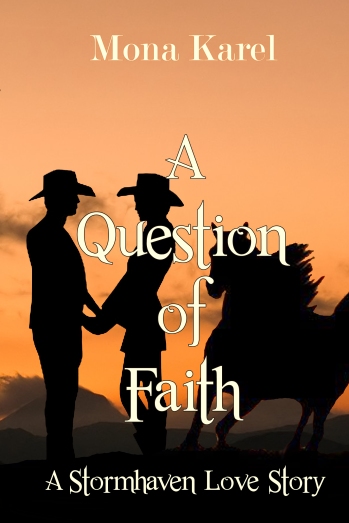 civic leader, maybe an entertainer. Maybe an author (well DUH) Then one day we meet them. Do we just stand there and stare? Are we struck dumb? Do we stammer out some inane statement, then hope they didn’t actually hear us?

Of course I’ve had those moments, and of course they were writers. One wrote about Salukis, and I was over the moon to meet her when I visited England. I dashed over to tell her how much I appreciated her generosity in sharing her knowledge. Except…the dear woman was totally deaf. What started out as an intimate chat ended up a near bellow, which she still did not understand. The people sitting around her were not amused.

An encounter with one of my all time favorite authors occurred earlier, and with a much more favorable outcome. At that time Elizabeth Lowell still lived in Southern California, was a member of the Orange County Chapter RWA, and often gave the morning craft talk. I gushed. I simpered. I stuttered. She smiled graciously, signed the book I held out to her. When I mentioned my recent litter taking me away from my writing, she demanded pictures. Then I asked: When would she write the next story in her Rocking M series. “Never. Contract issues with the publisher.” I admit I begged a bit.

She gave me a lovely enigmatic smile, and said: “You write it.”

So, I did. Well, not really. But I wrote about what might happen to a fighting man, wounded in body and soul, who meets that one woman who can drag him back to the light. I wrote A Question of Honor, then I put it away. When I brought it out again, looked at it with a slightly more experienced eye, I cringed. I cut out lovely scenes with a vicious pen. I molded. I sculpted. I sent it to. Black Opal Books

At the front, I wrote:

I would like to dedicate A Question of Honor to Elizabeth
Lowell, who encouraged me to write the books I want to read
and whose generous sharing of knowledge gave me the tools
needed.

Because, well, that’s what squealy fan girls do, when they can.