Hi All, waving from the land of odd weather and tumbleweeds, welcoming a fellow transplant into New Mexico, Kris Bock, who’s sharing her new book and also a quick ‘n’ easy recipe so you’ll get a taste of the Land of Enchantment. I’ll be out back, liberating the next wave of tumbleweeds.

In my romantic suspense Whispers in the Dark, my heroine is an archaeology Masters student working at the fictional “Lost Valley.” This site is closely based on Hovenweep National Monument. Located on the southern border between Colorado and Utah, 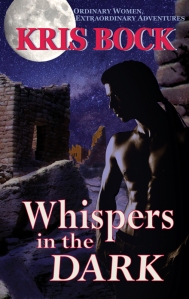 these ruins were left behind by the ancestral Puebloans, also known as the Anasazi. It’s a smaller site than some, but that’s part of its charm. You can hike and camp without crowds. The lonely location allows for an almost Gothic atmosphere – mysterious lights in the canyon, spooky moaning sounds, and plenty of people hiding secrets. My heroine, Kylie, finds more than she bargains for, of course – including mystery, danger, and new love. She also falls in love with the Southwest, as I did after moving to New Mexico more than a decade ago.

Whispers in the Dark is on sale for $.99 this week: Archaeology student Kylie Hafford craves adventure when she heads to the remote Puebloan ruins of Lost Valley, Colorado, to excavate. Romance isn’t in her plans, but she soon meets two sexy men: Danesh looks like a warrior from the Pueblo’s ancient past, and Sean is a charming, playful tourist. The summer heats up as Kylie uncovers mysteries, secrets, and terrors in the dark. She’ll need all her strength and wits to survive—and to save the man she’s come to love.

New Mexico is most famous, at least in culinary terms, for its green chile. The official state question is “Red or Green?” – How do you want the chile sauce that comes slathered over almost any dish? (Red chile is simply green chile that has ripened. It is usually dried and powdered, whereas green chile is roasted over open flames, chopped, and frozen until use.)

The following recipe is not exactly traditional, but it’s my quicker and healthier version of an enchilada casserole. The directions are a little informal, as I usually cook by the “make it up as you go along” method.

Chop a large onion and sauté in oil.

Add about 3 cups of chopped chicken (either fresh, or precooked, frozen chicken tenders). Sauté until cooked through.

Add one can of cream of chicken soup, one can or jar of enchilada sauce, and one can of drained, rinsed pinto beans. Mix well.

Top with a layer of shredded cheddar, Jack, or Mexican cheese.

This is one of my standards, because it only takes about half an hour to put together, and it makes enough leftovers for lunches. If you try it, I hope you enjoy it! You can also vary it by using black beans or ground beef, by skipping the meat and adding some vegetables, or by adding extra red chili powder if you like it spicy.

Kris Bock writes novels of suspense and romance involving outdoor adventures and Southwestern landscapes. Counterfeits starts a new series about art theft. Whispers in the Dark features archaeology and intrigue among ancient Southwest ruins. What We Found is a mystery with strong romantic elements about a young woman who finds a murder victim in the woods. Rattled follows the hunt for a long-lost treasure in the New Mexico desert. Read excerpts at www.krisbock.com or visit her Amazon page.