What HAVE I Been Doing?

When we call friends or family, inevitably, someone will ask: “Whatcha been up to?” As a lead in to catching up.  Occasionally the question brings irritation, since what we’ve been doing says too much about the lack of excitement in our lives.  Even so, it can be a catalyst to sharing, and the reply can be:

“So glad you asked.”

In the week since I last wrote here, I blogged for Orange County on the idea of Mature Romance books. Would this be a successful genre? Mature Romances? I’d enjoy hearing your take on this idea.

On the recipe front, I came across cauliflower pizza crusts…seriously! I’ve tried almond flour crusts, which were yummy, but this was my first foray into cauliflower, though I have made cauliflower cheese “bread,” including a green chili version that is pretty yummy. I started with this recipe: Original Cauliflower Pizza Crust

toppings (make sure meats are cooked)

Preheat oven to 450 degrees Farenheit. Spray a cookie sheet with non-stick spray (or use parchment paper)

In a medium bowl, combine cauliflower, egg and mozzarella. Press evenly on the pan. Sprinkle evenly with fennel, oregano and parsley.

**Most of these recipes call for cooked, riced cauliflower, either fresh or frozen. Sometimes I will get fancy and steam my cauliflower but most of the time I toss the 12 ounce bag of frozen cauliflower into the microwave until it’s hot, then drain, and use my (favorite kitchen tool) stick blender to mash it. 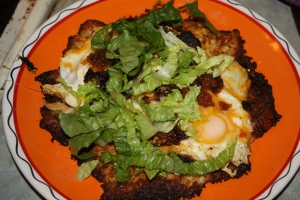 I made this as a pizza on Friday night and (sorry) gobbled it down too fast for pictures.  But the next morning I still had
some “dough” left.  Being of eclectic appetite, I decided to create a substitute for Indian Tacos (fried dough with all sorts of dangerously yummy toppings). While baking the crust, I cooked up some hot green chiles, then added eggs and cheese to the pan. Lacking fresh tomatoes (need to get to the market!) I used fire roasted salsa, and chopped up romaine lettuce as a garnish.  And it was GOOD.

On the writing front, I’ve been dusting off a series I started way back when, about a ranch in Northern New Mexico that serves as a resting place for people who need somewhere to decompress before easing back into their lives after battle. This first book concerns the daughter of a mercenary and a retired combatant. Both of them need to learn to forgive themselves for their past and trust each other if they’re going to have a future together.  It starts:

“She knew that walk.  With a slight hesitation in one leg he prowled like a wounded predator, conditioned to succeed against the most dangerous game of all.  Even limping, his reactions would be instantaneous, his balance superior.  By itself, his body would be a weapon.  He’d be the best man to have on your side in a battle.  After the battle, he’d unwind with a drink and a woman.  The drink would be strong and straight.  The woman would be bosomy and not too bright.  He’d very likely spend more time with the drink than the woman.”

6 responses to “What HAVE I Been Doing?”