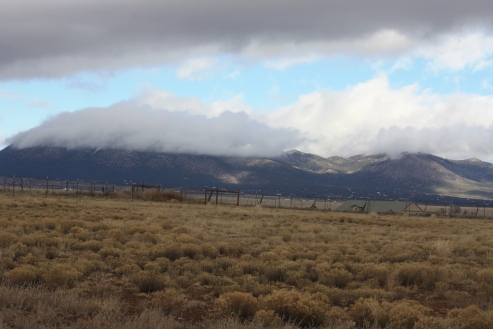 I made up some loaded cauliflower to take over for NYE with friends. Since I did not want to be driving on Amateur Drunk Driver night, it was more New Year’s Evening but any time spent with friends is a good time. When asked for a recipe, I realized I had strayed far from what I originally found, which was similar to this one: http://www.lowcarbmaven.com/loaded-cauliflower-low-carb-keto/

Generally I make mine with frozen cauliflower florets since they’re always available and the same basic price. I steam the cauli, either on the stove or in the microwave., then add the cream cheese, butter, sour cream, a splash of heavy cream, some grated cheese, and crumbled bacon. I cook that for a while until the everything has melted together, then stir to distribute and add more cheese. This I put back in the oven until the top cheese is melted and a bit brown. On occasion I’ll add sliced mushrooms or green chiles. The chives make a nice finish if I remember them!

This time, at my friend’s suggestion, I used Greek yogurt instead of the sour cream and heavy cream, without noticing much difference. Since yogurt is higher in carbs it’s not a substitution I’d automatically make but it ended up pretty darned good. The end result was a bit crispier than I usually make it, but still delicious. It keeps well in the fridge or freezer if you can avoid eating the whole bowlful at once.

That would be two bags of cauliflower, 12 ounces each; about 1/3 of a standard block of cream cheese; half a cup or so of the Chobani Greek yogurt; maybe 1/4 to 1/3 cup cooked crumbled bacon; “some” butter; a scant cup of grated cheese blend (this was a Mexican cheese). The fun is how much you can change the ingredients, using a very sharp cheddar or something a bit more out of the ordinary. I went light on the cheese in case my friends weren’t as cheese crazy as I am but they assured me with cheese the more the merrier!

For the shortbread, this started out as a low carb Pecan Sandies recipe, with 1 cup butter; 1 cup artificial powdered sweetener; 2 cups almond meal; 2 tablespoons heavy whipping cream; 1 tsp vanilla extract; 1/2 tsp salt; 1/2 cup pecan pieces. Cream butter, add sweetener, then add the other ingredients one at a time. Form into a roll, chill, slice off 1/2 inch for cookies (350F for 8-12 minutes) The cookies were always a bit too delicate for me, way too sweet but still very buttery yummy but a pain to deal with and they burned so easily. The fact that I might wander off during cooking had nothing to do with the burning.

I opted for a pan cookie, increased the almond flour and pecans, reduced the sweetener to a scant 1/2 cup. This time I used organic Stevia, with Erythritol.

I melted the butter about half way, used a hand mixer to cream then added everything else. I kept the mixer going when I added the pecan pieces since it helped to break them up even more. The first time I tried this recipe change I added a handful of sugar free chocolate chips…it’s better without. Better without chocolate? Yup, surprised me too 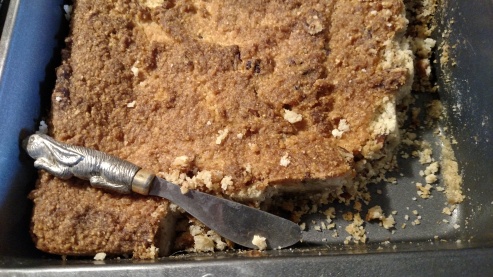 I used an 8 x 8 square pan. I’ll be looking for a small jelly roll pan so I can spread even thinner. You can chill before cooking if you want but in the pan I didn’t need to. Bake at about 325F until done. Since I use a countertop convection oven my times won’t help you much. I like it extra crispy so I’m likely to risk almost too long. I’m hoping a larger more shallow pan will help. I chill to help it set and also to get it out of my sight! As you can see I did a bit of taste testing before I managed to get this one into the refrigerator

And here’s a picture from late last December. What a difference a year makes!

2 responses to “About Those Recipes…Low Carb Comfort Food #MFRWAuthor”