Going to the Dogs

At first I thought I’d title this “Doing it Doggy Style” then decided that might give the wrong impression.  Instead I used my family’s description of my life, which they do try to understand.  I’ve been involved in purebred dogs for over forty years and have made most of my major life decisions with them in mind.   What I’ve done in that life isn’t relevant here except to underscore that I’ve been involved long enough to know how little I really know.

In my writing life, I’ve judged many contests for unpublished writers and read many books of (obviously) published writers many of which led to the previous blog on writing horses into books.  Far too often dogs seem to be added as an accessory, such as we see in pictures of celebrities with their big purses and tiny dogs, with little thought to reali

ty.  So I’d like to put out a few suggestions.

In historicals, if you’re writing about a Scottish Laird and his hound, please don’t make it a Wolfhound since those were Irish, not Scottish.  The correct breed is Scottish Deerhound or if you wish “large shaggy powerful hound.”  That one alone can turn me off a new author, sorry to say.  Breed boxing, or identifying dogs by a narrow definition, came about during the Victorian era. Prior to then there were separate breeds but they were not as rigidly divided.  If you’re going to have your heroine breed dogs for extra money, be sure that breed was in that country, or even existed at that time.

Dog shows as such did not exist until the mid 19th century.  Kennel clubs are generous with historical information so there’s really no excuse to get that wrong.  As far as how dogs shows are organized, as a rule of thumb if you saw it on Disney it’s wrong. Sorry Walt.  And you need to do more than wander through a large dog show for atmosphere, unless you really want to irritate people who take showing dogs seriously.  Most of whom, by the way, read voraciously.

So again, seek out people who raise dogs, who compete with dogs in whatever endeavor you want to use as a background in your books, to be sure you’re getting it right.  There’s not much more exciting than a sled dog race, unless it’s a Sighthound chasing the lure or a driven Agility dog attacking the course.

As far as dog care in your books, I’m not about to say what dogs should be fed since I have my own narrow viewpoint about that which is not critical to putting dogs in books.  But dogs must be fed. If your hero is likely to go rushing off at the drop of a hat, make sure someone’s going to stop by to feed, water, and clean up.

Yeah, as far as cleaning up.  Food goes in one end and comes out the other.  Fact of life.  Since most of the time we don’t mention such things for our characters, we might not want to mention them for their pets but it is a part of reality.  Excrement occurs.  Which means your intrepid heroine’s noble friend is going to have to visit the bushes from time to time and we do hope she will be responsible enough not to leave the  mess for someone else to step in.

If you’re going to use one of those pocket size dogs please don’t have them jumping off the bed, even if yours does it on a regular basis.  For a dog that size it’s a long way to the floor so give them a stool or some sort of step and you won’t have toy dog people screaming at you.  Those breeds with lovely luxurious coats look great in the show ring or in perfume ads but they take hours to keep in that condition, a consideration when your characters are off saving the world.

Check with a local kennel club, and with breed clubs to get your facts straight, and you’ll make friends for your books and for whichever genre you write in.  You’ll also add another marketing tool. 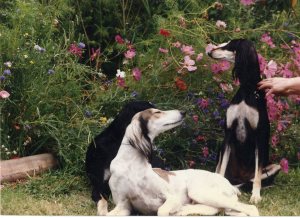 As far as my own dogs, I don’t think I’d ever put a Saluki in a book requiring them to exhibit instant obedience.  It’s often been said “Other breeds come when called, Salukis take a message and get back to you.”

6 responses to “Going to the Dogs”